Seven Earth-size planets that could potentially harbor life have been spotted orbiting a dim dwarf star called Trappist-1, which is located at 39 light-years away in the constellation Aquarius. According to NASA, all seven could potentially support liquid water, on the surface, but only three represent the “holy grail for planet-hunting astronomers,” because they are within the “habitable zone” where surface temperature could support the presence of liquid water and life might possibly exist.

“The planets are all close to each other and very close to the star, which is very reminiscent of the moons around Jupiter,” Michaël Gillon, lead author of the study, told the BBC. “Still, the star is so small and cold that the seven planets are temperate, which means that they could have some liquid water – and maybe life, by extension – on the surface.” 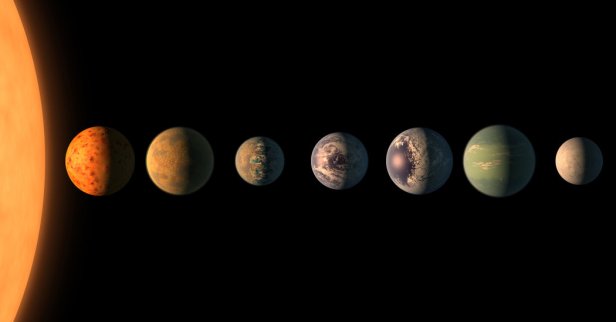 The discovery of these seven earth-sized exoplanets has been made possible by NASA’s Spitzer Space Telescope. Spitzer observed Trappist-1 for 21 days, capturing 34 transits. And with data from several other ground-based observatories, it revealed a total of seven planets. The findings are reported in the journal Nature.