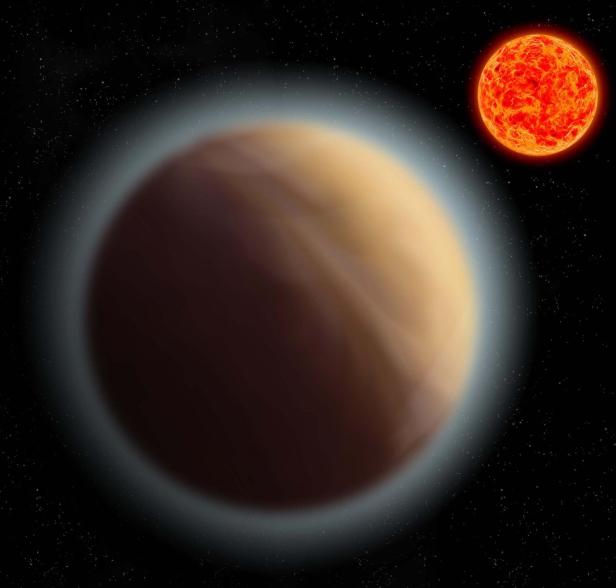 For the first time, researchers at Keele University have detected an atmosphere around an Earth-like planet called Gliese 1132b (GJ 1132b), which orbits the dwarf star GJ 1132. The planet is located at a distance of 39 light-years away from Earth in the southern constellation Vela, and has a radius about 1.4 times that of Earth and is 1.6 times Earth’s mass.

Early observations suggest that the planet has an estimated surface temperature of 370 degrees Celsius (698 degrees Fahrenheit), which makes it impossible for life like us to exist. And, at the time of its discovery, researchers called GJ 1132 a potential Venus twin because of its rocky surface and hot steamy atmosphere.

Dr John Southworth, who led the study, explains that “while this is not the detection of life on another planet, it’s an important step in the right direction: the detection of an atmosphere around the super-Earth GJ 1132B marks the first time that an atmosphere has been detected around an Earth-like planet other than Earth itself.”

Now, researchers’ top strategy in search for life on another planet is to detect chemical composition of that planet’s atmosphere, on the look-out for chemical imbalances which could be caused by living organisms. For example, the presence of large amounts of oxygen is a tell-tale sign of life on Earth.

Dr Southworth says that we are a long way from detecting life on exoplanets, but this detection of atmosphere is the first step.

“With this research, we have taken the first tentative step into studying the atmospheres of smaller, Earth-like, planets,” he explains. “We simulated a range of possible atmospheres for this planet, finding that those rich in water and/or methane would explain the observations of GJ 1132b. The planet is significantly hotter and a bit larger than Earth, so one possibility is that it is a ‘water world’ with an atmosphere of hot steam.”

The study has been published in arXiv.