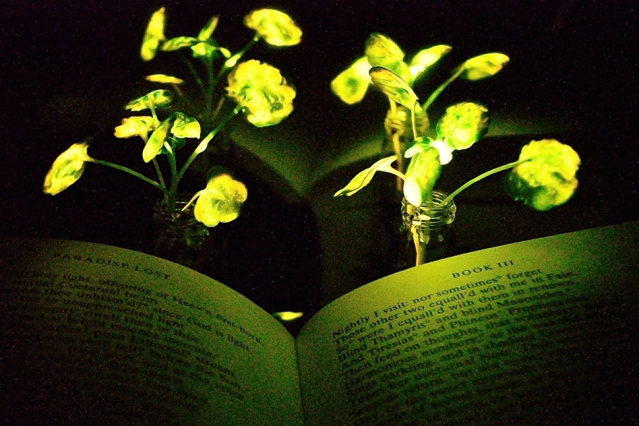 Engineers at Massachusetts Institute of Technology (MIT) have made a breakthrough in creating bioluminescent plants that glow in the dark. By injecting specialized nanoparticles into the leaves of a watercress plant, the team induced the plant to give off dim light for nearly four hours. While the chemicals involved for now could give off enough light to lit up the pages of a book, the team says with further optimization, the technology could be used to provide lights bright enough to illuminate a workspace, or to provide low-intensity indoor lighting, or to even transform trees into self-powered streetlights.

“The vision is to make a plant that will function as a desk lamp — a lamp that you don’t have to plug in.” says Michael Strano, the Carbon P. Dubbs Professor of Chemical Engineering at MIT and the senior author of the study. “The light is ultimately powered by the energy metabolism of the plant itself.”

In the study, the researchers used luciferase – the enzyme that gives fireflies their glow – which when reacted with a molecule called luciferin causes it to emit light. Another molecule called Co-enzyme A was added in order to stimulate the process along by removing a reaction byproduct that can inhibit luciferase activity. The team then had these three components packaged into a different type of nanoparticle carrier, and had them suspended in a solution.

Plants, too, were immersed in that solution and then exposed to high pressure. Doing so allows the particles to enter the leaves through stomata – minute pores in the lower epidermis of a leaf. While the particles releasing luciferin and Co-enzyme A were designed to accumulate in the extracellular space of the mesophyll, an inner layer of the leaf, the smaller particles carrying luciferase enter the cells that make up the mesophyll. And as the particles gradually release luciferin, it enters the plant cells and reacts with the luciferase, making the plants glow.

For now, the light the plants give off is currently about one-thousandth of the amount required to read by, which is very dim. But researchers say they can boost the brightness, as well as the duration of light through further optimizations of the concentration and release rates of the chemical components. At the start of the project, the team could make the plants glow for about 45 minutes, but now they have managed to improve the duration of the glow to three and a half hours.

In the earlier attempt to create light-emitting plants, the team relied on genetically modifying plants to express the gene for luciferase. The process took a lot of work and it could yield extremely dim light. Moreover, those experiments were only limited to certain types of plants such as tobacco plants and Arabidopsis thaliana. However, this new method can work on any type of plant, and so far it has been demonstrated on arugula, kale, and spinach, in addition to watercress.

The team also plans on developing a way to paint or spray the nanoparticles onto plant leaves, so they can transform trees and other large plants into light sources. Lightning accounts for about 20 percent of worldwide energy consumption, but if their research pans out, it would mean a significant cut to CO2 emissions.

“Plants can self-repair, they have their own energy, and they are already adapted to the outdoor environment,” explains Strano. “We think this is an idea whose time has come. It’s a perfect problem for plant nanobionics.”

“Our target is to perform one treatment when the plant is a seedling or a mature plant, and have it last for the lifetime of the plant. Our work very seriously opens up the doorway to streetlamps that are nothing but treated trees, and to indirect lighting around homes.”

They also have demonstrated that they can turn off the glow as well by adding nanoparticles carrying a luciferase inhibitor in response to environmental conditions such as sunlight.

Check out the glowing plants in the video below.

The study, entitled “A Nanobionic Light-Emitting Plant” has been published in the journal Nano Letters.