An international team of astronomers has found that the sun’s core rotates nearly 4 times faster than the sun’s surface. Previously, it was assumed that both the core and the outer surface were rotating at about the same speed. Researchers say their new findings may give a clue to how the sun was formed.

“The most likely explanation is that this core rotation is left over from the period when the sun formed, some 4.6 billion years ago,” said Roger Ulrich, a UCLA professor emeritus of astronomy, in a news release.“It’s a surprise, and exciting to think we might have uncovered a relic of what the sun was like when it first formed.”

In the study, the team analyzed surface acoustic waves in the sun’s atmosphere, some of which penetrate to the sun’s core, where they interact with gravity waves that have a sloshing motion similar to how water would move in a half-filled tanker truck driving on a curvy mountain road. From those observations, they were able to detect the sloshing motions of the sun’s core.

Then, by carefully measuring the acoustic waves, the team determined the time it takes for an acoustic wave to travel from the surface to the core of the sun and back again. They also found that the travel time is influenced a slight amount by the sloshing motion of the gravity waves. 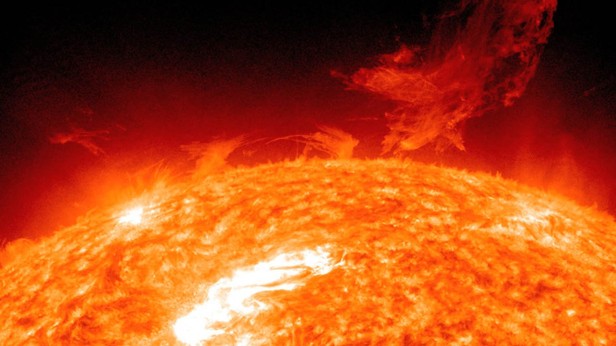 16 years worth of data from an instrument called Global Oscillations at Low Frequency (GOLF), attached to the spacecraft called the Solar and Heliospheric Observatory (SOHO) – a joint project of the European Space Agency and NASA, made it possible for the researchers to identify the sloshing motion and make the calculations. The method was developed by the team of researchers led by astronomer Eric Fossat of the Observatoire de la Côte d’Azur in Nice, France.

The idea that the solar core could be spinning faster than the outer surface has been mulled over for more than 20 years, but has never before been measured.

Researchers also found that the core of the sun differs from its surface in another way as well. It has a temperature of approximately 29 million degrees Fahrenheit, which is 15.7 million Kelvin, whereas the outer surface is only about 10,000 degrees Fahrenheit, or 5,800 Kelvin.

Now that researchers have discovered the true temperature of the sun’s core, what about the laser (that can make certain material hotter than the sun’s core) which scientists at Imperial College London claimed to have made? I think they would need to work better.

The study, entitled Asymptotic g modes: Evidence for a rapid rotation of the solar core, has been published in the journal Astronomy and Astrophysics.