Gravitational waves are ripples in the fabric of space and time caused by cataclysmic events in the universe such as supermassive black holes mergers or massive stars explosions. Albert Einstein first predicted gravitational waves in his general theory of relativity a century ago.

According to Einstein’s general theory of relativity, anything massive in the universe can distort the fabric of space and time through its gravitational force – the more massive an object is, the more it bends space-time. So, when cosmic events, for example – when two black holes merge towards each other – take place, they send waves along the curved space-time around them as gravitational waves at the speed of light, just like the ripples formed when someone drops a stone in a pond. And, these waves can distort space and time.

Simulations of the gravitational waves emitted by the merger of two black holes. [APA Physics]

Detection of gravitational waves have remained elusive and scientists have struggled for so many years to find them, because the predicted waves were so weak. For example, ripples produced by merging of two supermassive black holes would stretch a one-million-kilometer ruler on Earth by less than the size of an atom. Even Einstein was skeptical that they would ever be detected.

But now, an international team of physicists has finally pulled off their 100 years of endeavor. Yes, they have been able to confirm the existence of Einstein’s gravitational waves for the first time in 100 years.

The gravitational waves were detected on September 14, 2015 and physicists have been able to make this historic achievement with the help of the twin Laser Interferometer Gravitational-wave Observatory (LIGO) detectors, located in Livingston, Louisiana, and Hanford. These twin detectors detected ripples in the fabric of spacetime – gravitational waves – that were produced during the final fraction of a second of the merger of two black holes to form a single, more massive spinning black hole.

The detection of gravitational waves is a huge deal not only because it has confirmed the existence of black holes, but it also has confirmed the key prediction of Einstein’s general theory of relativity. Now, we have a whole new way of studying the fundamental laws of universe and how the universe is shaped by mass.

So how do these LIGO detectors work?

The LIGO detectors are in fact interferometers, meaning these detectors use wave interference to make accurate measurements of length or displacements in terms of the wavelength, which is, in this case gravitational waves. The detectors shine a laser through a vacuum down two 4-kilometers-long pipes that bear the shape of an L. Inside these pipes, the light from the lasers bounces back and forth. 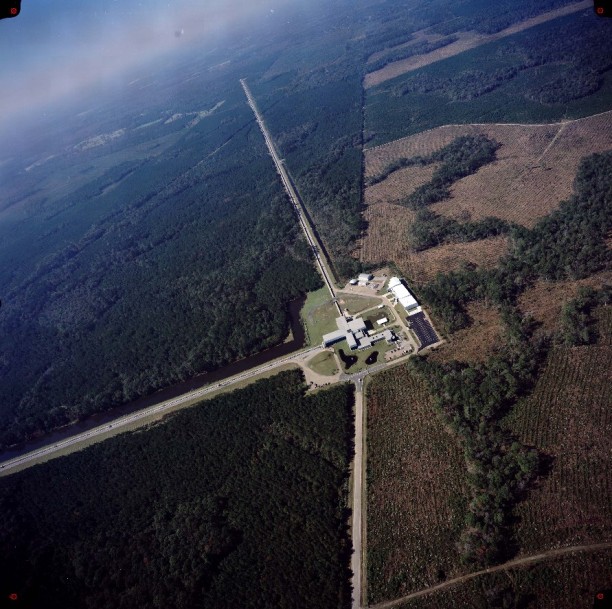 According to LIGO scientists, if there is a disturbance in space-time, the time the light takes to travel 4 kilometers will be slightly different and this would make one arm seems longer than the other. They measure the interference in the lights coming from two directions when they come back to meet, and therefore, this reveals information on the space-time disturbance. In short, these bouncing of lasers back and forth allow physicists to measure incredibly small changes in space-time.

So on September 14, 2015, scientists were able to pick up a blip in the system in their lab located in Livingston, Louisiana. Then again, they detected the same blip 7 milliseconds later, in their lab located in Hanford, Washington. Thanks to the enhanced capabilities of Advanced LIGO, which has far more superior sensitivity compared to the first-generation LIGO detectors.

For months, scientists were skeptical whether the blip was caused by something else. However, on February 11, 2016, they confirmed that the blip was actually caused by gravitational waves.

According to LIGO scientist, the signal they picked up has a statistical significance of 5.1 sigma, which qualifies the criteria for the signal being real. They were also able to confirm that the signal perfectly matches up with their prediction of gravitational waves based on Einstein’s general theory of relativity.

Moreover, physicists say the signal, gravitational wave, came from two black holes merging, which took place 1.3 billion years ago. They estimate the black holes for this event to be about 29 and 36 times the mass of the Sun.

The event – in which these two black holes merged and collided to form a supermassive black hole, which has 62 times the mass of the Sun – was so massive that it distorted space and time, generating ripples that reached the Earth on September 14, 2015.

In fact, if two black holes of 29 and 36 solar masses merged, they were supposed to form a black hole of 65 solar masses. I mean, if you do the calculation, 29 + 36 is 65. Although I am not sure, I guess the missing 3 solar masses were converted into Gravitational Wave Energy.

In the first part, the sound wave frequencies exactly matches the frequencies of the gravitational waves. In the later part, they have been set at higher frequencies in order to fit the human hearing range.

The detection of gravitational waves have certainly open new ways for physicists to explore the earliest and darkest parts of the universe. Researchers are planning to build more gravitational wave observatories and detectors, which they expect would be operational in the next five years. Moreover, the LIGO Laboratory is awaiting approval by the government of India for building a third LIGO detector on the Indian subcontinent.

The findings have been published in the journal Physical Review Letters

19 thoughts on “Gravitational Waves Detected Century After Einstein’s Prediction. Here’s What Scientists Did To Prove Him Right”