Theoretically, we know a lot about universe and there is a lot more to explore but we don’t have the slightest idea of how the universe might actually like. Yes, I am talking about the ever-expanding universe. Thanks to astrophysicists at the University of Waterloo!

The image below is the most comprehensive 3D map of the universe, created by astrophysicists at the University of Waterloo, that spans nearly two billion light years from side to side. It was first appeared on Monthly Notices of the Royal Astronomical Society. 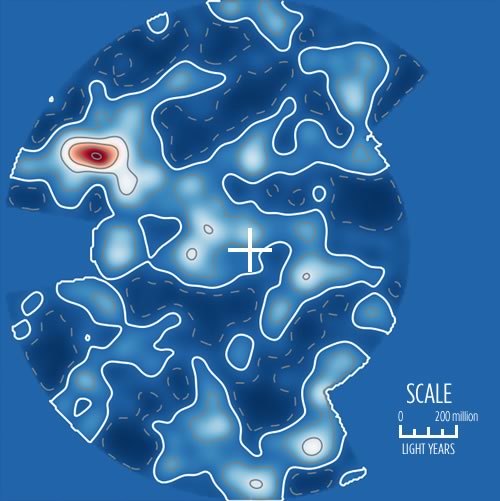 In the image above, our Milky Way galaxy is marked by a cross at the centre. The white and the lighter blue areas constitute greater concentrations of galaxies. The medium blue areas represent the unexplored part of the universe. The red area represents the Shapley Supercluster or Shapley Concentration, the largest collection of the galaxies in the nearby universe.

“The galaxy distribution isn’t uniform and has no pattern. It has peaks and valleys much like a mountain range. This is what we expect if the large-scale structure originates from quantum fluctuations in the early universe,” said Mike Hudson, a professor of the Department of Physics and Astronomy at the University of Waterloo.

Mike and his team, Jonathan Carrick and Stephen Turnbull believe that with the help of the 3D map of the universe they created, astrophysicists can now know trace the location and motion of matter in the universe to predict the expansion of the universe and identify where and how much dark matter exists.

Talking about dark matter and the Big Bang, you may want to read about the first signs of Self-Interacting Dark Matter that suggests dark matter is not completely dark after all and a new twist to Big Bang that says the universe has no beginning or end.

Hudson said, “A better understanding of dark matter is central to understanding the formation of galaxies and the structures they live in, such as galaxy clusters, superclusters and voids,”. They hope to get more detailed samples of peculiar velocities and implementation of valuable tools to determine the distribution of dark matter to enhance the map, in collaboration with researchers in Australia, in the near future.